New friends and some friendly competition at Smith Elementary School

My new pal, “Backpack Bear” from Jackson Primary, made a bunch of new friends at Sarah Smith Primary!

Dr. Freda Hamilton’s office may have been the most friendly, welcoming principal’s office ever! 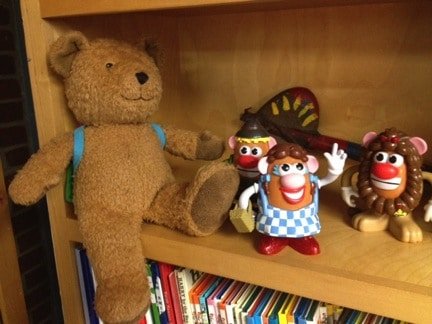 It’s full of fantastic souvenirs from the University of Georgia, Dr. Seuss books and an awesome Mr. Potato Head collection.  Backpack Bear found a spot right near the Wizard of Oz-themed Potato Heads.

In Ms. Moran’s French class, Backpack Bear found a friend in a beret! I practiced some French with Ms. Moran and discussed the importance of language on brain development. 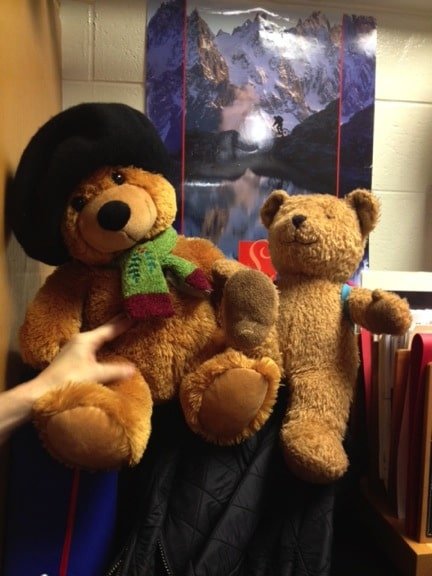 She’s been a teacher 19 years, has spent 12 years with APS and agrees with me that setting a goal that our students become bilingual and trilingual was not far fetched and would benefit all of the students in the district.

Ms. Brookins stopped me in the hall to tell me that I have actually inspired her to get her Ph.D.! She’s been teaching nine years. It’s a wonderful complement but really I am the one inspired every day by the incredible work of our teachers.  I encouraged her to go for it and to finish quickly.

Backpack Bear met another classroom mascot in Mrs. Cecil’s first grade class, Leo Lion. He goes home with students on weekends so they had plenty of suggestions on where I should take Backpack Bear, including Stone Mountain and LEGOLAND. 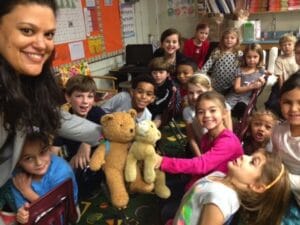 Thanks for the great ideas and delicious hot chocolate! Students were passengers on the Polar Express that day with Mrs. Cecil as the conductor. She’s more than qualified to lead that train as a former Teacher of the Year and a current member of my Teacher Advisory Committee.

I joined Mrs. Peake’s first-graders on the floor for a phonics game before heading to the gym. I can’t believe P.E. teacher Daniel Monroe rides his bike 12 miles to school every day. His P.E. partner in crime is Daniel Sprague. While students practiced strikes in stations I jumped on a scooter and raced Dr. Hamilton around the fitness practice drill.

Principal Hamilton wouldn’t let me go until I heard kindergartener Jonathan sing “Let it Snow” in Spanish to the tune of Disney’s “Let it go”. I sure hope he doesn’t let go of his passion for singing. He was fantastic.

I jumped in the car (after making sure Backpack Bear was in his seatbelt), and ate lunch with the school’s Principal, Dr. Kenneth Proctor and students at Smith Intermediate. The fourth graders told me all about the trials of balancing homework and extracurricular activities.

I know it’s not what they wanted to hear but research shows extracurricular activities lead to organized and efficient students which, guess what, makes them better to handle homework!

Lunch included jerk chicken, plantains, cabbage, red beans and rice, and a bread stick. I even got desert from fourth grader Matthew who was celebrating his 11th birthday.  His mom made cupcakes for his friends and brought them to school. He generously offered me one without any coaxing.

You can see the fabulous and brand new playground from the cafeteria. Parents were able to raise all the funds necessary to make that green space a reality.

I headed over to the gym instead for a volleyball game; however, I think it may have been better to wait a little longer after lunch.

I ended my day in a competitive game of Jeopardy with Jack in Ms. Dowell’s third grade class. I nailed the trivia section on Greek history and architecture but was awful at civics and government. Jack was making me sweat especially when it came to the civics questions.

Regardless of the final score, Backpack Bear and I had a great time engaging in some friendly physical and mental competition with our kids. They kept me on my toes…I mean PAWS!