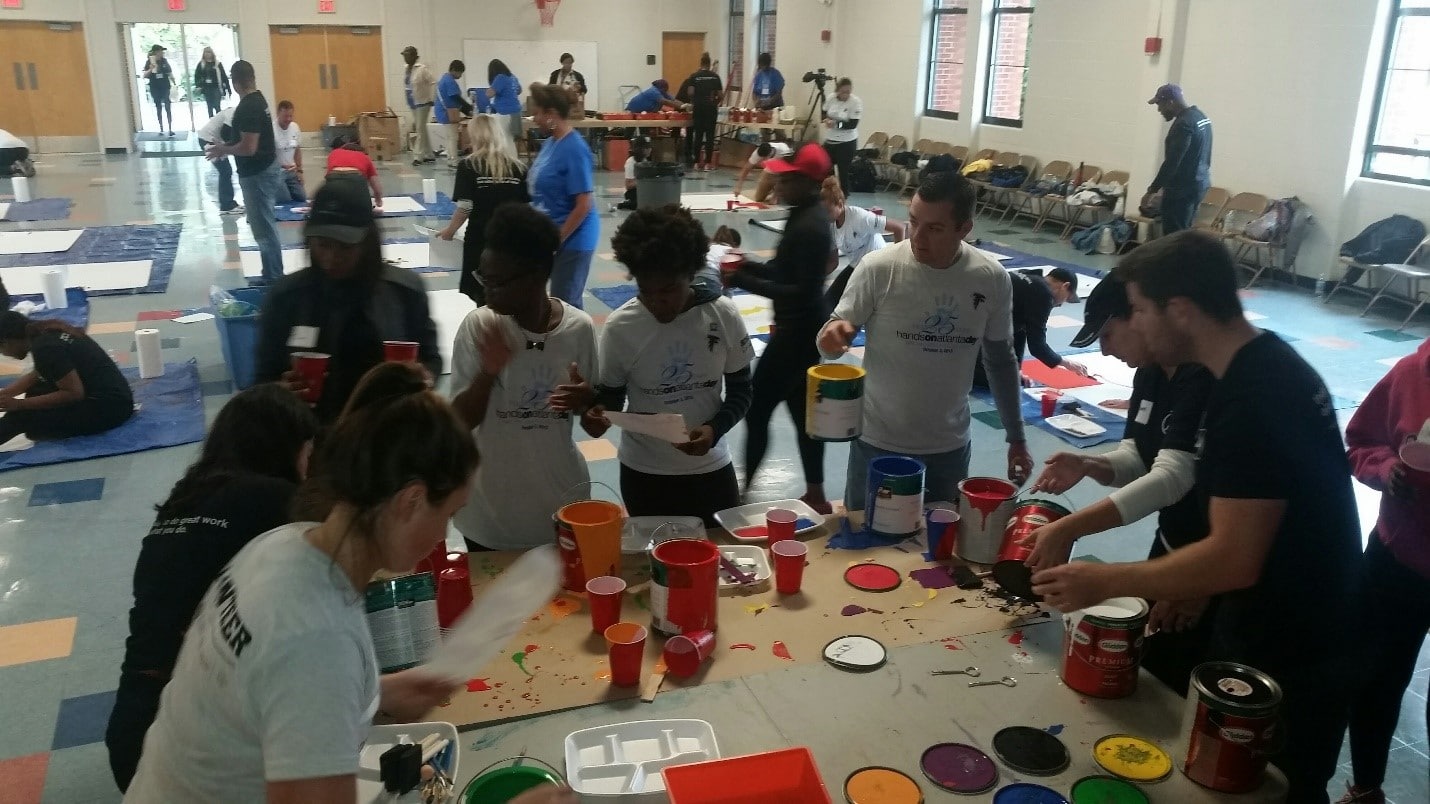 The gloomy weather could not keep thousands of volunteers from showing up for service projects across the city today as part of the annual Hands on Atlanta Day.  For 25 years, Hands on Atlanta has been a driving force behind positive community change in Atlanta, and year after year they rally volunteers to help transform our APS campuses. From planting gardens and painting murals to building playgrounds and overhauling classrooms – thousands of generous folks moved mountains, and for that we say thank you!

Our APS Deputy Superintendent, David Jernigan, visited multiple campuses and chronicled today’s events. Take a look below…and again, thank you to everyone who came out to transform our schools!

I was thrilled to be able to kick-off the day with Hands on Atlanta president, Gina Simpson. We met at D. H. Stanton Elementary School, where Principal Robin Robbins was preparing for a school make-over, thanks to volunteers from several organizations and businesses including Mercedes-Benz.  Steve Cannon, their dynamic CEO, took a few minutes to greet everyone, but he was eager to roll up his sleeves for a tree-planting project.  It was also appropriate that Michelle Nunn, Hands on Atlanta’s Founding Executive Director, joined in on the fun and reminded the group of volunteers of the organization’s rich history.

After the inspirational kick-off, the volunteers got busy with the many projects that included gardening and painting murals.  I know the kids are going to be so excited when they return to school on Monday and see the transformation in the building. 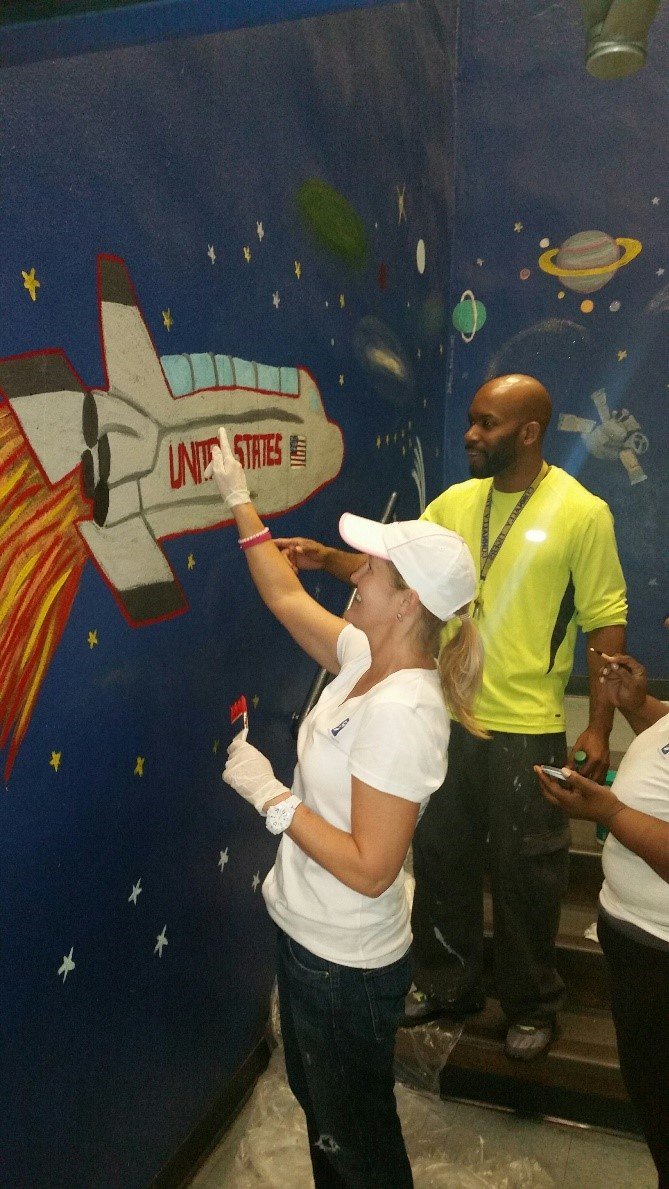 After D. H. Stanton, I was off to Connally Elementary School where volunteers from Global Payment were busy sprucing up the school’s marque, painting walls in the cafeteria, and creating murals in the gym and hallways. Principal Lincoln Woods was running around when I arrived, but he was not too busy to provide affirmation to the volunteers who were painting murals that were “out of this world.”

Around the corner from Connally Elementary School, volunteers from Delta Airlines were partnering up with Kaboom! to build a playground for the KIPPsters at KIPP STRIVE Primary.  It was so awesome to see Principal Mini’imah Shaheed and KIPP Metro Atlanta’s Executive Director Kinnari Patel-Smyth getting their hands dirty and their boots quite muddy!  Delta’s Vice President for Community Affairs, Tad Hutcheson, was also on the scene providing support and encouragement to his team.  While the project was still in its early stages, he assured me that by 2:30 p.m., they would be cutting the ribbon on a new playground.  I guess that old proverb, “Many hands make light work,” will truly manifest itself today at KIPP STRIVE Primary! 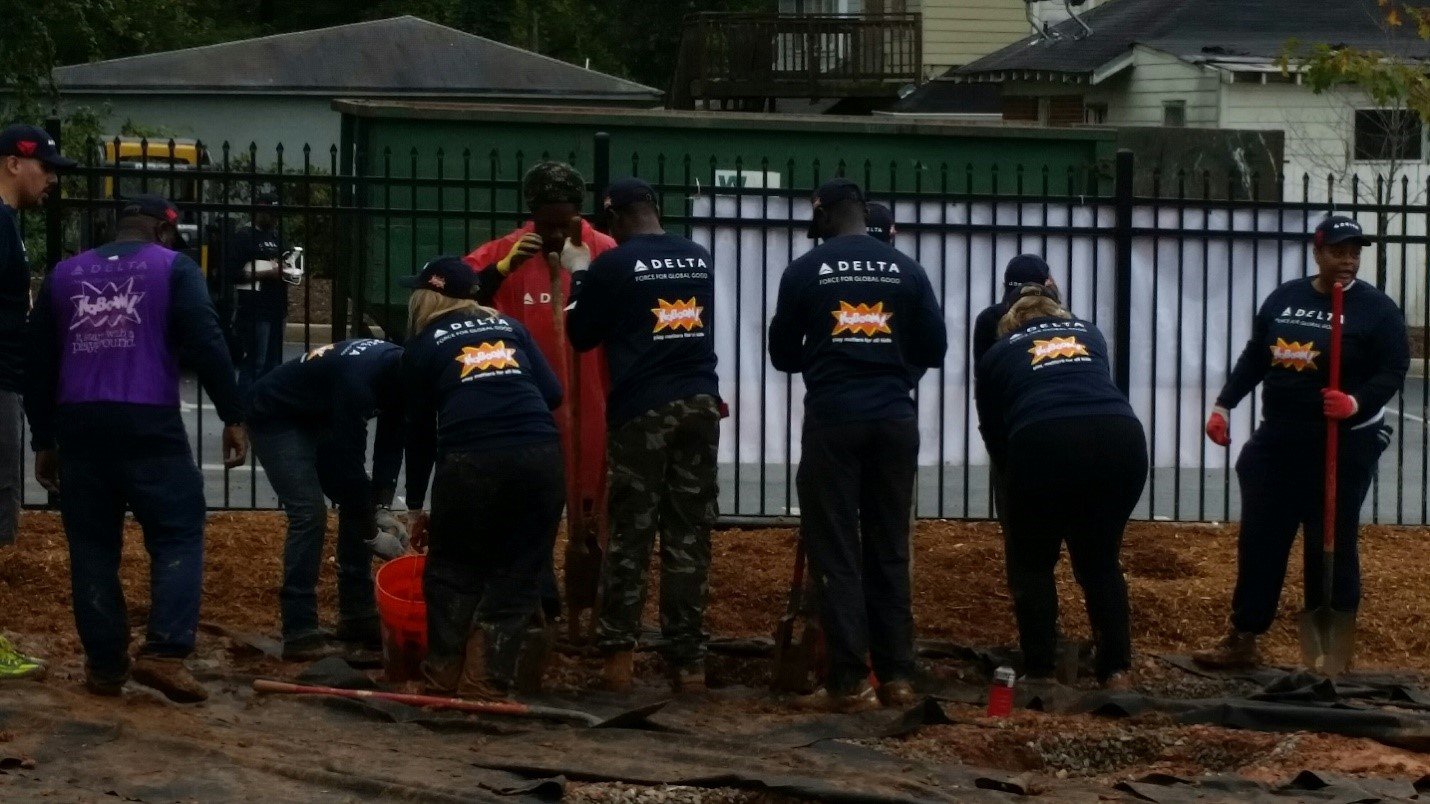 My final stop before heading back to Zoo Atlanta to close out the day was at Bethune Elementary School.  The volunteers from Coke were already wrapping up by the time I arrived, but their hard work was very evident. Clorox is clearly a very generous sponsor of Hands on Atlanta Day because the fresh smells of their cleaning supplies welcomed me from the minute I walked in the door. Principal Amia Burnette seemed so pleased with the landscaping and cleaning projects completed in such a short period of time!

While I wasn’t able to make it around to the dozens of other APS projects happening this morning, I am confident that they were equally impactful. As a former principal, I know first hand how powerful a service project can be for a school.  Not only do these projects model for our students the importance of service and giving back to one’s community, they also demonstrate to our kids that their community cares about them.  While it may seem like a small gesture, bright flowers and freshly painted murals tell a kid that his school matters and that his community is behind him.

I’m so inspired by the thousands of volunteers who crawled out of bed this morning to give a little of their time to their community.  Thanks so much to the many corporate sponsors and especially to Hands on Atlanta for making today possible for our students!