Honoring Our Heroes: Veterans, Military Service Men and Women … and the Tuskegee Airmen

Every day but on Veterans Day in particular, I stand in awe of our veterans and the men and women who actively serve in the U.S. armed services. Their job is to protect our nation, keeping it a free and safe place for our students as they grow into adulthood. They do so while making the great sacrifice of putting their lives at risk in the service of others.

Like many of our students in Atlanta Public Schools, I am a member of a family with veterans. My late Uncle Ralph – to whom I paid tribute in this space last year – was among those whose sacrifice and service to our country and to his family continues to make me proud.

But I wanted to pay special tribute to the Tuskegee Airmen. Along with Board Member Steven Lee and Principal Lincoln Woods of the Tuskegee Airmen Global Academy, I got to spend some quality time with a few of them during an appreciation ceremony today at Prince Hall in Riverdale.

Humbling to be in the presence of actual Tuskegee Airmen! Thank you for your service!

Each of them have distinct tales of resilience, grace under pressure and uncommon valor … tinged with a certain sense of irony.

As most of us know… at the time they were recruited for service to serve as bombing escorts for World War II – arguably the most dangerous of the dangerous aerial missions in that war – black men were deemed to be of significantly less intelligence than white men. There were actually “scientific” studies that stated that their brains were physically smaller. Army reports described black soldiers as “childlike,” “unmoral and untruthful” and “shiftless.” (It’s still unbelievable to me that our servicemen and women had to endure these conditions and belief systems!)

And yet, the Army itself was recruiting these very young men to operate extremely complicated machines and some of the most sophisticated technologies available during that part of the 20th century.

Now here’s where the irony comes in.

Board Member Steven Lee and I with Deputy Grand Master Corey Shackleford Sr. of the Prince Hall Grand Lodge, which sponsored the event

They trained this new squadron of pilots at Moton Field near Tuskegee Institute in Alabama. As they recruited these black men, not only did many of these raw recruits have college degrees already, some of them even had their pilot’s licenses! In many ways, they were the most qualified recruits for any branch of the service! In all, 992 pilots were trained from 1941 to 1946.

And after training, these pilots could do the seemingly impossible! Such as flying at hundreds of miles an hour in formation with their wings only inches apart.

Now as a private pilot myself, I salute these Airmen for that feat alone! But, there are even more war time accomplishments:

Now a sad irony. They would come home and still be subjected to the Jim Crow laws they had left behind. The country they protected bravely from the air would reject them and neglect them once they returned to the ground.

But many of these Airmen overcame the odds. 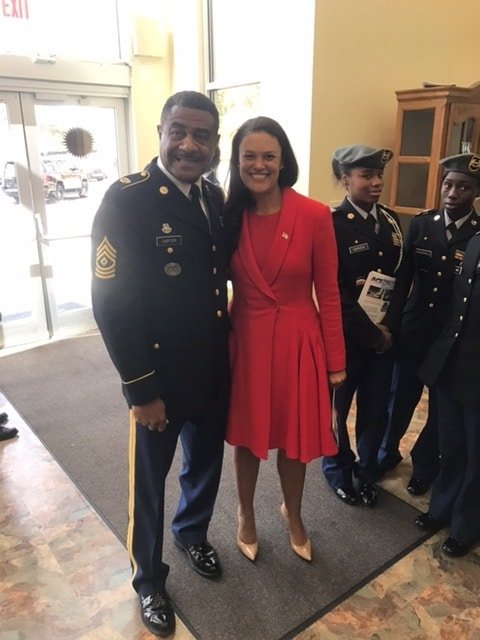 By bravely stepping up and fighting for their country while fighting for their own rights and dignity at the same time, they paved the way for greater things. This includes inspiring the men and women of the Civil Rights Movement. They continue to inspire us today.

A Special Kind of Tribute

Over the years, I have been enormously proud when our students, educators, staff and school communities came together to recognize our veterans. We have had food drives, clothing drives, partnerships with the USO, special programs and presentations. We have brought veterans into our schools so they can tell us stories and impart some of their lessons and wisdom they have gathered over the years through turbulent times.

But I don’t know that we have ever honored our veterans in such a grand and appropriate fashion as we did recently with the opening of the Tuskegee Global Airman Academy this year.

When we made the hard but determined decision to merge Connally and Venetian Hills schools this year onto a single campus, we knew that we couldn’t do the work lightly, carelessly or thoughtlessly. We had to be deliberate in making the new school into something worthy of those communities and of the Airmen they sought to commemorate.

And I am not just talking about the naming of a school, which is pretty fantastic in itself. I am talking about the whole spirit … the entire curriculum … the entire school inside and out. From the marquee outside of the school to what is going on in the classrooms themselves, the aura of the Tuskegee Airmen engulfs that school community.

We chose the STEM curriculum as the signature theme for this school with an additional emphasis on aeronautic science and engineering. With that kind of spirit, cooperation and collaboration, we can be certain that the young Eagles of Tuskegee Airmen Global Academy will soon soar much in the ways of Eagles and the Tuskegee Airmen themselves.

Please take your experiences, dedication and passions from serving our country and direct those energies toward the services of our children, the future of our nation.

These kids need you. They really do.

Most of all, they could use your time.