Making ‘Cents’ of the Dollars APS Spends for FY2018

For a school district, a return from Spring Break not only highlights the final sprint toward graduation ceremonies and summer break, it means delving deep into the dollars and cents to carve out budgets for the next school year ahead. 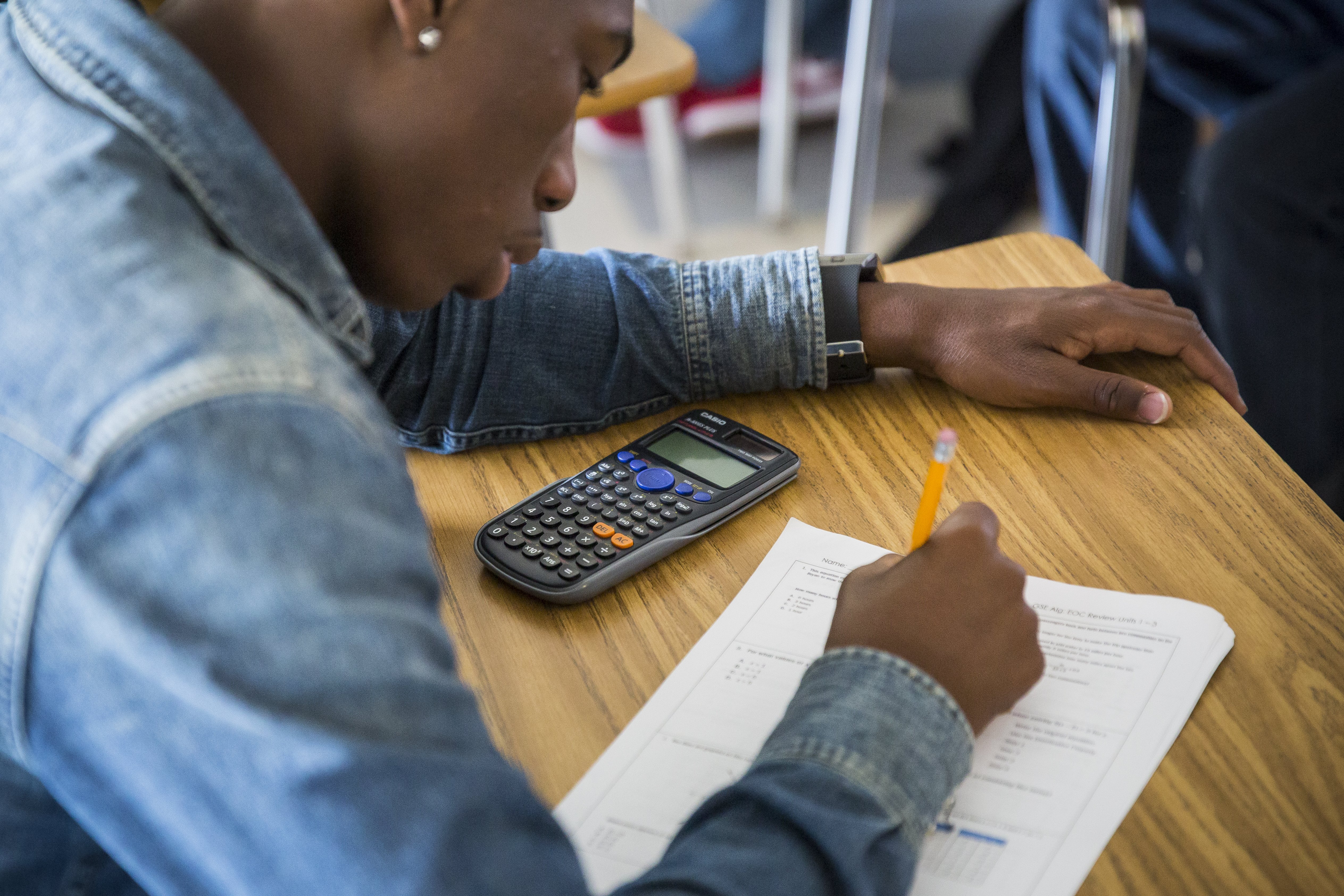 Sure, the Atlanta Board of Education, my colleagues and I have more and more numbers swirling in our head these days. But the truth in Atlanta Public Schools is that they are swirling because we are changing our fiduciary mindset, and we now emphasize smarter, multi-year budgeting practices all year long while putting kids and support for schools first. Almost as soon as the Board approved the FY2017 General Fund Budget in June 2016, we were already looking ahead to FY2018 budgets.

To do this, we had to start right away!

For example, not long after Day One 2016, the Board began laying out a Budget Calendar and developing Budget Parameters during retreats and board meetings. After the Board formally approved those documents at its December 2016 meeting, my team and I used the Board’s timeline and strategic priorities as guidance when we began developing the budget itself. 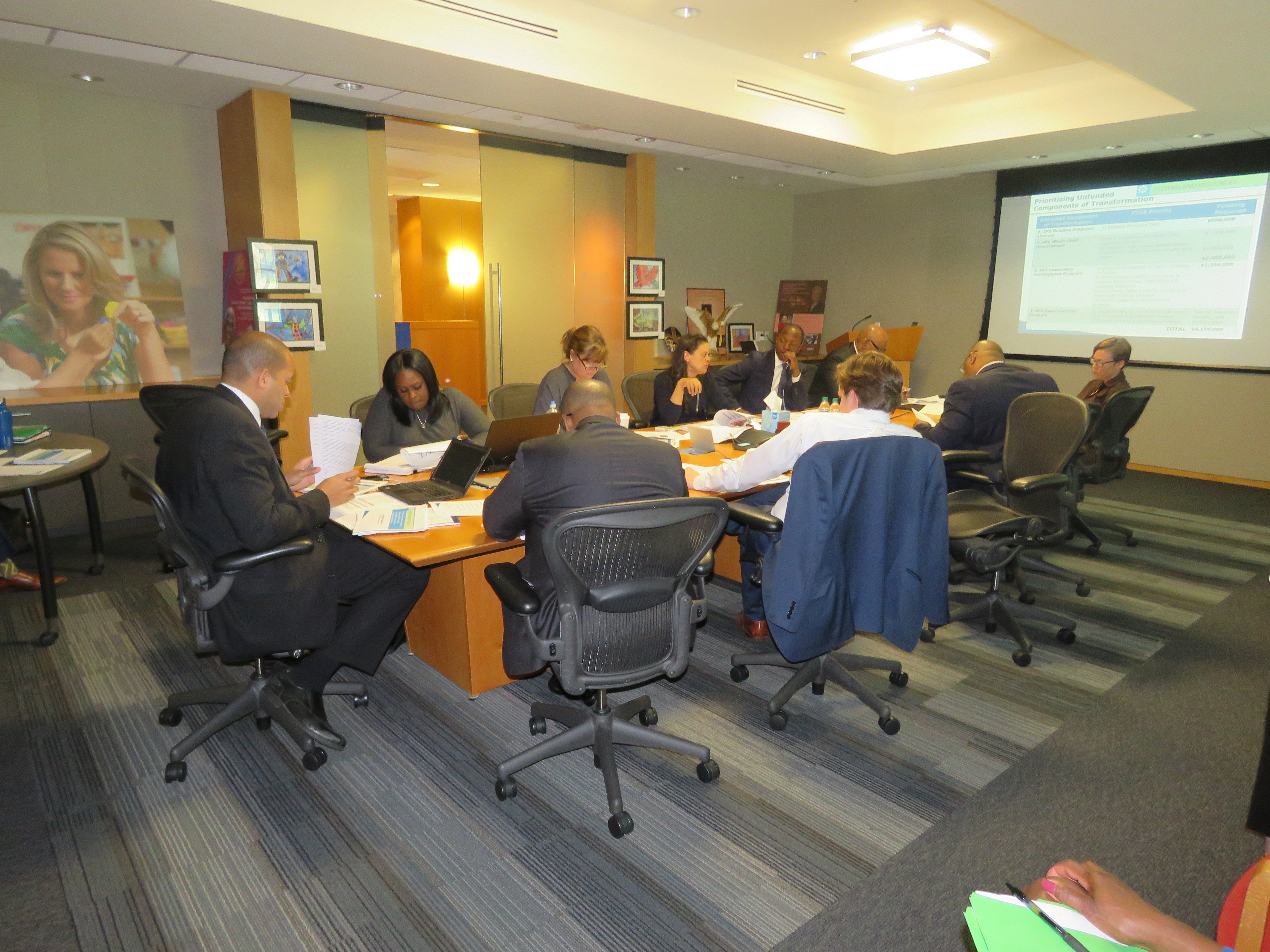 Over the past few months under the leadership of Jason Esteves (At-Large, Seat 9 Board Member and Budget Commission Chair), our finance team has reviewed revenue projections for FY2018. Over that time, we have been very transparent with about 20 commission, advisory and board meetings about budgets, so there are no surprises.

Presently, we expect a budget of about $777 million, which is $15 million more than the current year’s budget. While we expect this modest increase in revenue, we cannot be complacent when so much of that money goes to mandatory and ever-increasing expenses in health costs, pensions and the scaling of board-approved charter schools.

Therefore, the administration has been hard at work to slim down our costs by finding efficiencies and redundancies, particularly within Central Office budgets, and without needing a tax increase! Over the past three years, we have reduced our Central Office expenditures by more than $20 million and more than 100 FTEs.  Additionally, we have reinvested within our Central Office to fund budget parameters, such as cutting deeply in our finance department to reallocate dollars to academics to support schools. 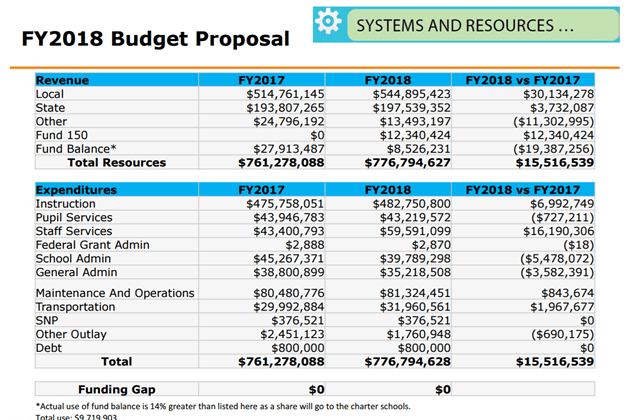 Funding will continue for the signature programming such as STEM, International Baccalaureate and College and Career Prep with an increase by $3.5 million from FY2017! (YAY!). Signature themes are key components of the district’s cluster model and our effort to improve student achievement. Principals will have more autonomy over their budgets through a state/federal pilot program that grants them the ability to combine their school allotment (state/local funds) with their Title I allotment (federal funds).

The theme this year was about doing more with less and getting creative in how we are using our existing funds for quality and efficiency throughout the district. Some examples include the creation of:

One of the most exciting realignments involves changes to reporting structures to show school-based expenditures at the individual school locations instead of within the Central Office.  This provides us a better measure of the true cost of running each of our schools.

As with this current year, the budget work for FY2018 only begins with board adoption of a general fund budget. We are establishing a task force which will begin meeting in June to review the school allotment formulas for FY2019. This Student Success Funding task force, comprised of principals, finance officers and Central Office staff, will be reviewing how APS pushes resources out to schools and making recommendations about how APS could move towards a student-weighted funding formula. This new formula will further solidify our commitment to ensuring that resources are distributed equitably, transparently, and in such a way that allows flexibility and autonomy where it most counts – closest to the students of APS.

We will make our first formal presentation of a tentative budget at the Board’s May 1 meeting, where we will also hold our first public hearing on the budget. Throughout May, we will hold regional public meetings from:

A final public hearing will be held on Monday, June 5, before the budget is put before the board during its regular meeting.

We have been fortunate in APS in that we have a not-so-secret weapon handling district finances – our Finance Department led by CFO Robert Morales and Lisa Bracken, Executive Director of Budgeting Services. This is not just me praising them. This comes from such respected groups as the Government Finance Officers Association, which honored them with its Distinguished Budget Presentation Award, and the Association of School Business Officials International, which gave them a Meritorious Budget Award for excellence in budget presentation.

Want to know what an organization really believes? Follow the money! I firmly believe how a district spends its money speaks volumes about what it values. This proposed budget says:

And if we get an uptick in local collections above our revenue assumptions, the Board and I will keep pushing on any additional revenues to further pay for unfunded components of transformation, which include reading/literacy, whole child development, an APS talent development program and a district early learning program.

Transformational change is hard; it’s not always popular; it’s never comfortable. Unfortunately, it can be hard on staff, especially those whose jobs are directly affected. Between reductions in Central Office staff and the implementation of new school changes, some staff members will need to reapply for positions throughout the district. For any employees worried about their circumstances, I encourage them to contact Pam Hall, our Chief Human Resource Officer, at prhall@atlanta.k12.ga.us or at 404.802.2322 or visit the HR contact page.

This kind of focus really encourages me throughout the budget process and positions the district to really get the most out of its dollars to provide our kids a quality education that gives them real choices in college, career and life.