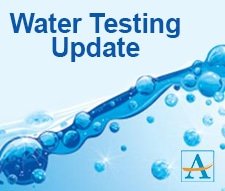 With less than a month before we open the 2016-2017 school year, Atlanta Public Schools is quickly and methodically wrapping up its voluntary, proactive effort to test the district’s water sources to determine if there is any lead.

As I wrote in detail a couple of weeks ago, we took the initiative to test our water in the wake of national reports of lead in the water in public buildings. This decision to test came without preliminary reports or traces of lead in our own water, without edicts from the EPA and without prodding from other outside entities to conduct these tests.

While I know any mention of lead combined with a lot of sensationalizing of our efforts raised concerns especially among parents, I still believe it was the right decision to take this effort now for the safety of our students and staff. Tha 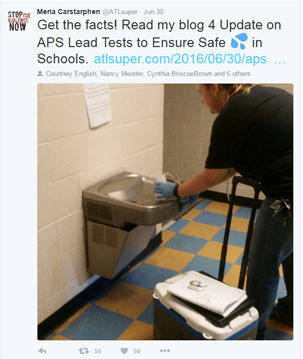 t way we could not only complete the full battery of tests before the start of school but also take the necessary corrective action to ensure safe drinking water well before any child steps back into our buildings on Wednesday, Aug. 3.

At just past the mid-point of receiving our results, most of our water sources pass federal standards. But in the rare instance where they haven’t, we are immediately taking corrective actions. We aren’t finished with testing yet, but I wanted to provide a mid-point check-in.

It’s important to frame these tests in two big buckets. The first involves presenting the test results for water sources across the district, in all of its buildings including schools. The second drills down to the individual school level.

Bucket Two: Of the 25 schools showing elevated levels of lead on the first test, seven passed after a re-test. The remaining 18 are awaiting retesting results or facility upgrades such as replacing of faucets or other plumbing fixtures. These 18 school sites include:

To ensure our stakeholders have information in real time, I will continue to provide as much of the results as I can as we receive them. Of course, we will make all of the results and data available upon completion of the testing process, which we expect to have wrapped up in the next few weeks. In the meantime, we are sending letters to the families and staff of the impacted schools to update them further about our efforts.

You can learn more about water quality tests here or contact Yvonne Douglas, Project Manager, APS Energy and Environmental Services at 404-802-3720 or ydouglas@atlantapublicschools.us.