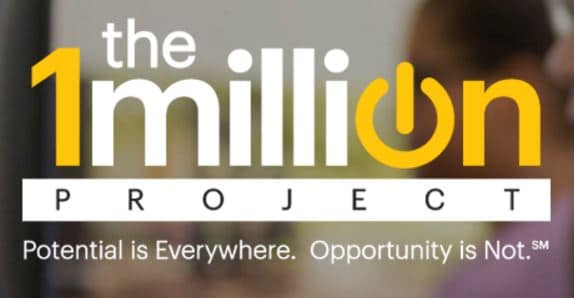 Sprint and the 1Million Project Foundation announced new, significant investments to support Atlanta area high school students who lack home internet access and face unnecessary challenges to do their homework and reach their full potential. Doug Michelman, president of the 1Million Project Foundation, outlined a drastic expansion of the organizations’ efforts to give free devices and internet access to every eligible high schooler in the Atlanta Metro who does not have reliable broadband service at home. The program has expanded locally from two districts to seven, and nearly doubled the number of Atlanta area student participants to a total of nearly 20,000.

“Far too many students across the country do not having access to the internet when they go home each day from school, leaving them unable to complete homework, conduct research, and apply for jobs and college admission,” said Sprint President and CEO Michel Combes. “Sprint is in a position to do something about this problem called the homework gap, and that is why we are helping low-income high school students in Atlanta by supporting the 1Million Project and funding a unique initiative to help participating students in the Metro Atlanta area that has a need.”

“The 1Million Project has made great strides toward fulfilling its mission to connect 1 million high school students nationwide, and we are incredibly proud of what we’ve achieved across the country and right here in Atlanta,” said Michelman. “And we want to do more – a lot more! So, we’re going big in Atlanta by offering a free device and free internet access to any high schooler in the Atlanta area who is missing out on the critical connectivity they need to achieve their full potential.”

Participating Atlanta Metro school districts are receiving an in-kind donation of free service from Sprint valued at almost $7.6 million, and free mobile devices from the foundation valued at $2.1 million.

The 1Million Project Foundation launched in August 2017 with a mission to help one million high school students achieve their full potential by ensuring they have the digital tools and connectivity they need to succeed in school. During the past two school years, the initiative has connected a total of 226,000 students total at over 1,900 high schools in 33 states with internet access and devices. The foundation expects more than 70 new school districts and more than 100,000 high school students nationwide to join the initiative in its third year.

According to the U.S. Census Bureau, approximately 24% of Atlanta households do not have internet access. Over the past two school years, the foundation worked with Atlanta Public Schools and DeKalb County Public Schools to connect 11,200 students by providing them the essential digital tools they need to access the internet virtually anywhere, anytime just as most of their classmates do. With the expansion announced today, five new school districts will join the program. Atlanta-area 1Million Project Foundation school districts include (* indicates new participants):

Additional interested Metro-area schools can apply online for the program.

“We are in the third year of our partnership with Sprint and the 1Million Project which has afforded our students access to digital devices and high-speed Internet, helping level the playing field around access to digital resources,” said Dr. Meria Carstarphen, Superintendent of Atlanta Public Schools. “That access is critical for our students and families and it’s essential in helping them gain 21st Century skills to assist them with accomplishing their college and career goals. What’s even more exciting is that 100 Black Men of America has now joined this effort and will be providing our students who receive these digital resources with the mentorship and support they need. We are so grateful to both Sprint and 100 Black Men of America for investing in the success of our students.”

“As a leader in mentoring, educating and empowering youth, partnership with the 1Million Project is a natural fit for 100 Black Men of America,” said John Armstrong Jr., CEO of 100 Black Men. “We support the partnership because it helps address the education gap that has plagued the African American community for decades.  It keeps children safe at home and allows us to do what we do best – mentor,” says 100 Black Men CEO John Armstrong, Jr.

100 Black Men of America uses the diverse talents of its global membership, including the Emerging 100® and Collegiate 100®, to create environments where children are motivated to achieve by working with local school systems, along with corporate and community partners, to deliver educational support services and unique learning opportunities that help students graduate high school and reach their post-secondary education goals.

Source: “Sprint and the 1Million Project Announce Major Expansion of Initiative to Give Device and Anytime Internet Access” was first published at http://metroatlantaceo.com/news/2019/11/sprint-and-1million-project-announce-major-expansion-initiative-give-device-and-anytime-internet-access/

Georgia Offers Lessons and Warnings in Return to In-Person Classes